Dark days of the Holocaust lead to community service

But she knew the horror well. 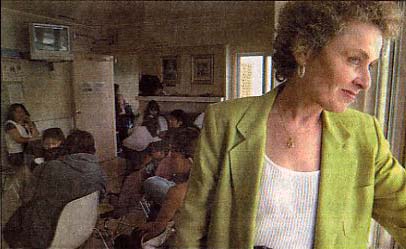 As a program director with Kaiser, Diane Strum is guided in her workwith community clinics by her family's personal connection to grave suffering. Roni Galgano/Union-Tribune

She cringed from the icy blank stare of maniacal Mengele as he condemned you, with the point of a finger, to either certain destruction in a death house or near endless hard labor in a work camp.

She felt the paralyzing fear that grips as you and your last link to beloved family ways are separated and jam packed into crowded freights bound for yet more untold misery.

Strum understood the unspeakable loss of all hope.

Though she was born in Davenport, Iowa, and reared in San Diego's North Park, the 55-year-old inherent community preservationist was inexorably linked to the world's great travesty, mainly through the experiences of her parents.

And through more than the stories, they passed onto their older of two daughters a feel for the suffering of others.

"When you have a connection to something like (the Holocaust) in your background, it seems to naturally follow that you would be involved in" service to others," Strum says.

That's how she explains why all the jobs she's ever held as an adult have been in some kind of service to the community.

It's also why she works so hard at what she's done now for the past two decades.

In the role in 1986, she developed a partnership program through which the huge health care organization provides mainly medical support for the 21 community clinics here in San Diego county.

Thousands of mainly indigent patients, who rely on the nonprofit clinics for free medical care, have benefited from the Kaiser partnership over the years. And recently, the San Diego Council of Community Clinics named Strum a "Health Hero," recognizing her work in keeping the program going strong.

The director, who'd also taught sociology for four years at the community college level before coming to Kaiser, says it was almost instinctive the way the blueprint for the partnership appeared in her head.

There was a way that her then new employer could help some most needy people and she saw it; the same as she'd recognized her time to give up teaching and come over to the world of health care.

The window on all that, she says, was clearly provided by the spirit in what her folks passed on.

With tears welling in her eyes, resilient Strum talks about how her mother, who died 16 years ago, at 67, would wake up crying for her own mother, who'd been taken away and killed at a death camp when Frimet was very young.

And Frimet, herself, a longtime prisoner in the infamous extermination camp at Auschwitz, never forgot those evil eyes of the so-called "Angel of Death," Josef Mengele. He directed operations and coldly controlled who lived and who died.

"My mother never spoke with bitterness about her experiences, neither did my father or my other relatives (who survived camps)," Strum says. "But their pain was always clear. And I always knew that (victims of the Holocaust) were people in tremendous need."

And the empathy that grew each time she'd hear the stories, expanded her ability to feel the needs of more people than just those kin who were locked in a horrible situation.

Volunteer of the Month

Return to Colts in the News